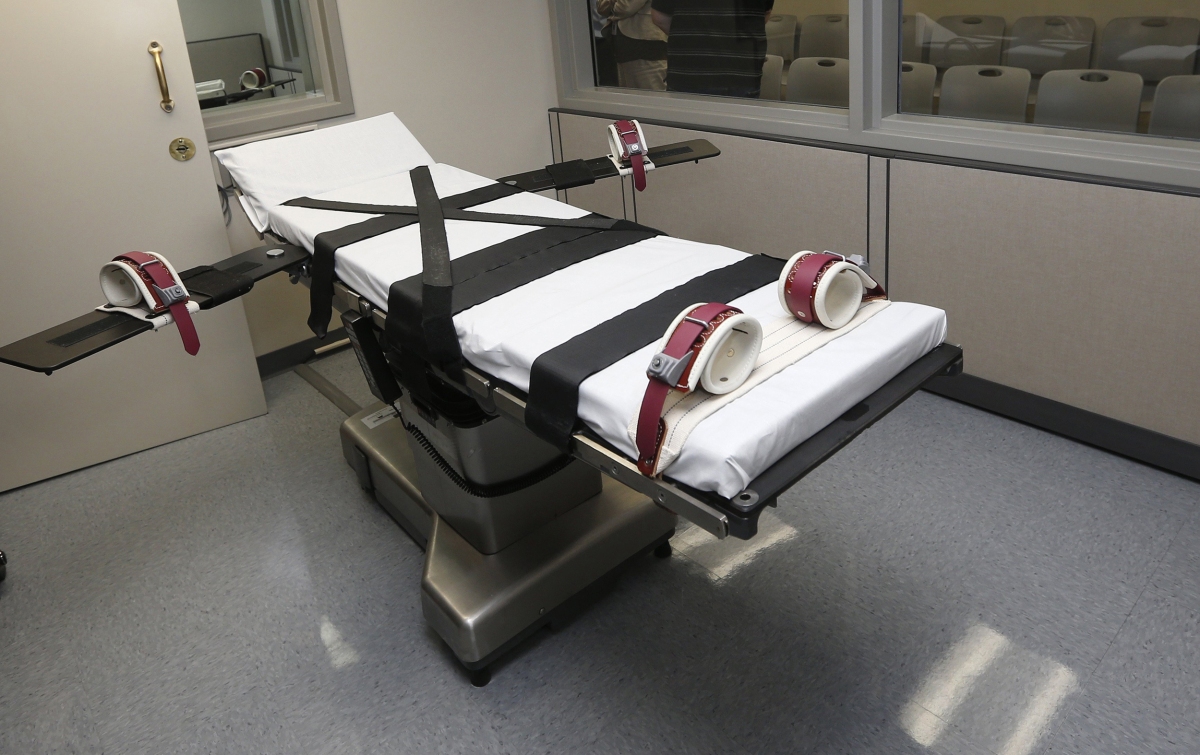 Recently, I watched a documentary on the state-sanctioned execution of Sean Sellers.  When he was 17, he murdered his parents.  He did not deny he committed the act.  He was convicted and sentenced to death.  He was executed by lethal injection at 12:17am, on  February 4th, 1999 in an Oklahoma State Penitentiary.  His case brought worldwide attention because of his age when he comitted the crimes – by law, he was still a child.  Nevertheless, after numerous appeals and a clemency hearing, another life was taken from us.  The entire situation is a terrible tragedy.

The obvious loss is Seller’s parents, Lee and Vonda, but we also, as Christians, must recognize the loss of Sellers, himself.  It is not right that he took the lives of his parents, and for that, God will judge him appropriately; our faith tells us that we must trust God in His infinite wisdom and mercy.  We are commanded to forgive him for his actions, as difficult as that may be.  Jesus says if we do not forgive, we will not be forgiven.

Capital punishment, and the American corrections system, in general, does not deter people from committing crimes, nor does it rehabilitate those under its control.  The criminal legal system focuses on vengeance and punishment, as Jesus tells us, “25 Make friends quickly with your opponent at law while you are with him on the way, so that your opponent may not hand you over to the judge, and the judge to the officer, and you be thrown into prison.26 Truly I say to you, you will not come out of there until you have paid up the last cent” (Matthew 5:25-26). The legal system does not forgive, yet those who make up the legal system, fallible people, sinners, just like the accused, are commanded to forgive.  People allow themselves to be a part of a system that compels them to directly violate the commandments of Christ.  This is why a Christian must be self-aware enough to not favor, call for, enact, or enforce any penalties for a conviction that violate the commandments of Christ, and we should object to participating in such a system, any situation that causes us to draw away from God’s love.  We must not fall victim to our own emotions when dealing with those who sin against us, as emotions cause us to become irrational, especially when grief is involved.

And, one should understand that we should not be a part of any worldly system, but we are free from mandatory participation.  In Mathew 17:24-27, Jesus tells us of how we are to operate in this world: 24 When they [Jesus and the disciples] came to Capernaum, those who collected the two-drachma tax came to Peter [Jesus’ disciple] and said, “Does your teacher [Jesus] not pay the two-drachma tax?”25 He said, “Yes.” And when he came into the house, Jesus spoke to him first, saying, “What do you think, Simon [Peter’s birth name]? From whom do the kings of the earth collect customs or poll-tax, from their sons or from strangers?” 26 When Peter said, “From strangers,” Jesus said to him, “Then the sons are exempt. 27 However, so that we do not offend them, go to the sea and throw in a hook, and take the first fish that comes up; and when you open its mouth, you will find a shekel. Take that and give it to them for you and Me.”

If we look at the literal translation of what we read as “offend”, we see it means cause them to stumble.  Christians should abide by laws and customs which are not ungodly, so that the people enforcing the godly laws of the State may not sin and possibly fall off the narrow path that leads to God.   Keep in mind, we are all individually responsible for our own choices.  If, by affirming the Kingdom of God, it appears to others we have caused someone to stumble, they were never on the narrow path to begin with.  Above all else, we live in the Kingdom of God, where Jesus is our leader.  We must honor God in all we do if we are to fully know Him.

Those who condemned Sellers to death, whether in though, word, or deed, will be guilty before God, unless they forgive him and then ask for God’s forgiveness.  And Jesus affirms this.  In Matthew 5:21-22, Jesus says, “21 “You have heard that the ancients were told, ‘You shall not commit murder’ and ‘Whoever commits murder shall be liable to the court.’ 22 But I say to you that everyone who is angry with his brother shall be guilty before the court; and whoever says to his brother, ‘You good-for-nothing,’ shall be guilty before the supreme court; and whoever says, ‘You fool,’ shall be guilty enough to gointo the fiery hell.”  Jesus is clear; any form of vengeance is a sin – even wishing it upon someone.

I will not even try to imagine the grief the families of the deceased have endure.  I admire their courage and pray that all involved will find God’s peace.  Perhaps, one day, they will understand that we live in a broken world, and people are so very fragile.  Sellers was a disturbed young man, and he did what he did because we are so very fragile.  Sometimes, we get caught up in meeting the wholly insignificant demands of society that we neglect the most important things.  Sellers came from a divorced-then-remarried household.  He did not have a relationship with his biological father, instead, he embraced his step-father, Lee, as dad.  But Lee was away from home much of the time as a truck driver, so he spent little time with Sellers.  Lee also had to divide his home time between his wife and Sellers’ siblings.  Sellers and his family also frequently moved from house to house, sometimes three times in a year.  He went through the difficulties of starting in a new school many times.  Just given these few points about what Sellers went though growing up, it is easy to see how he could have grown into a disturbed young man.  This is not to cast blame, but to illustrate how children can be affected so deeply that, when they gow up, they act out in evil ways.

We live in a very broken world, but, if we all follow Christ, the world will change for the better.  We can fix this, together.  It takes love, sacrifice, and truth – all things Jesus embodied.  We should look to be just like Jesus.  When he hung on the cross, out of the agony of pain and the depth of his love, he asked God to forgive the ones who condemned him.  They mocked him, spit on him, threw things at him, as he knew they did those things because they did not know who Jesus truly was.  Then he died, a crown of thorns on his head, nails through his ankles and wrists, his entire body beaten and battered into submission, as he did not resist those who condemned him.  In faith Jesus obeyed God until the end.  There was nothing that Jesus did that God did not want him to do.  He was truly the Son of God and the Son of Man.  And then God fulfilled another promise.

Three days after Jesus died on the cross, God raised him from the dead.  And, through belief in and obedience to Jesus’ teachings, God promises to raise us from the dead, as well.  If we keep His faithful promise of eternal life in the forefront of all we think, do, and say, then it becomes easier and easier to follow God.  When we also remember that we live in a broken world, and people are always imperfect, mostly indifferent, and sometimes evil, it becomes easier to cope with the effects of the actions of those who hurt us.  And when we think about those who hurt us, we must forgive them and pray they will come to know God.  We can’t save them, and they can’t save themselves; only God can save.