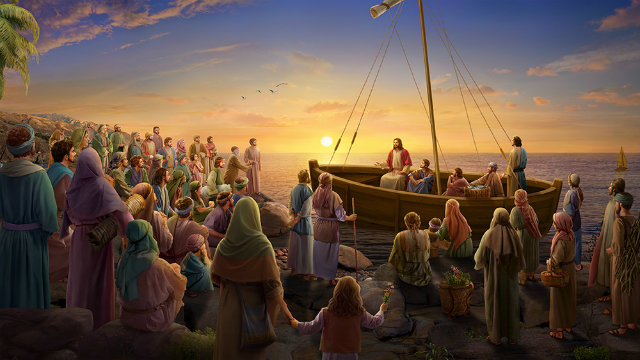 A parable is a story told by Jesus to explain a moral truth.  Jesus often uses parables to explain his message to people who couldn’t quite understand the Word of God, either wilfully or unintentionally.  It would seem logical that Jesus would tell common people stories with common themes they could all understand, but there is a deeper reason for his teaching in parables.

In the Parable of the Sower (Mark 4:3-9), Jesus tells of a man who went out one day to plant seeds.  He tells this parable to a large crowd of people who have gathered on a beach to hear his message.  They are not his disciples, so he tells them this story:

3 “Listen to this! Behold, the sower [seed planter] went out to sow [plant seeds]; 4 as he was sowing, some seed fell beside the road, and the birds came and ate it up. 5 Other seed fell on the rocky ground where it did not have much soil; and immediately it sprang up because it had no depth of soil. 6 And after the sun had risen, it was scorched; and because it had no root, it withered away.7 Other seed fell among the thorns, and the thorns came up and choked it, and it yielded no crop. 8 Other seeds fell into the good soil, and as they grew up and increased, they yielded a crop and produced thirty, sixty, and a hundredfold.”9 And He was saying, “He who has ears to hear, a]”>[a]let him hear.”

Afterward, Jesus is asked by his disciples why he speaks to the people in parables.  His answer is somewhat mysterious, and it almost makes Jesus seem like he doesn’t want people to be saved.  Make no mistake, Jesus was completely in tune with God’s Will, so he certainly wanted people to be saved.  That was the sole reason why God sent him to us.  Jesus answers his disciples by saying (Mark 4:11-12):

11 And He was saying to them, “To you [Jesus’ followers] has been given the mystery of the kingdom of God, but those who are outside get everything in parables, 12 so ‘that while seeing, they may see and not perceive, and while hearing, they may hear and not understand, otherwise they might return and be forgiven’.”

To be very honest, when I heard this (I like to listen to an audio Bible), I was confused, angry, upset, and any other emotion that one goes through when they feel their beliefs are being challenged.  I thought, “How can Jesus NOT want people to be saved?”  But, instead of jumping to conclusions, I went to God in prayer.  And, of course, He told me to look deeper into it. He told me, “You know My Son; would he say those things?”  Obviously not.

So, what gives?  If Jesus said he speaks to those outside the Kingdom of God so they may not understand, it would seem like Jesus is keeping something from those who have come to hear him and his message.  But he is not.  He is actually quoting the prophet Isaiah (6:10), where God tells Isaiah that his preaching will cause the already hardened hearts of those hearing his message to further reject it.  The same rationale applied to Jesus’ message.  Jesus understood this, and he knew he needed to keep a separation between his plain message he gave to his disciples and the message he gave to those outside the Kingdom of God – those who have not heard the Gospel or those who have heard it and have not fully accepted it.  Because Jesus also knew that there would be people to whom he preached the Gospel that would hear it and reject it, even if he softened his message by using parables.  So, if Jesus were to preach the same messages as he taught his disciples, in the same way he taught them, those outside the Kingdom of Gos would further reject the Gospel, and more people would not come to be saved, and they would never know God.

See, the light is Truth, and darkness is lies, deception, and sin.  Those who live in darkness often continue to  live in that darkness because the light reveals their sin to all, because it is brought into the light.  When their sin is revealed, they will either repent or condemn the revealer.  Therefore, when the Gospel was preached to those who could accept it, because they wanted to live in the light, they wholeheartedly embraced it.  Those who did not accept it continued to live in darkness.  Still, in order to not compromise free will, Jesus gave the word of God in parables, so that people would willingly open their eyes and ears and accept Jesus and his salvation.

When it comes to the understanding the Will of God, faith and trust are paramount to anything.  Thank God we have the teachings from Jesus that we do, so that in seeing, we may perceive, and that in hearing, we may understand, so that we would repent and be forgiven.  Jesus says, “Repent, for the kingdom of heaven is at hand.”  The Kingdom is here.  It is now.  There is no time like the present to step into the light and come to know the One who created us.